Damn, I am so bad at keeping this blog updated. It's not for lack of things to say, or because I've been idle. The days just seem to fly by. It's unnerving.

April and May were one huge blur of activity. I spent some time chilling in the Highlands of Scotland. My older Sister celebrated another Birthday...yeah she has one EVERY year! Happy Birthday Tracey. My sister-in-law, who has waited an inordinately long time to become a parent, gave birth to a teeny-weeny 5 pound 5 ounce little bundle of gorgeousness. Welcome to the world Lewis. And my oldest Sister will soon be celebrating her Birthday. Happy Birthday Lesley!
Like I said, a blur.
Talking of days just whizzing by, today my assistant Ming-the-Merciless retired and I'm beside myself with grief. Is it too much to ask that he work on for another 18 years until I retire? Apparently so. People can be so selfish can't they? Seriously though, I wish him all the very best that life has to offer. Bye-Bye Johnny, I'll miss you.

Okay so back to my happy place.

I often revisit miniatures that I've made and try to make them better. It's rarer than rocking horse poo for me to be completely satisfied with something first time around. If you're under the illusion that I make miniatures start to finish without moments of angst/insecurity/difficulty then think again. At times the air is blue with frustration.

So the radio I was working on for Ming got a revamp. I  think it looks more 'Cathedral radio'-esque than before and of course I love chucking a working light in here and there. 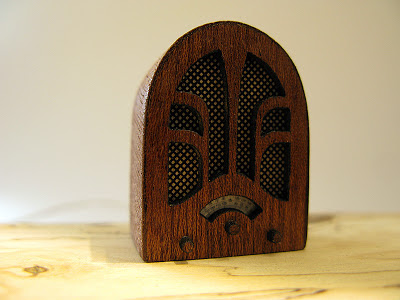 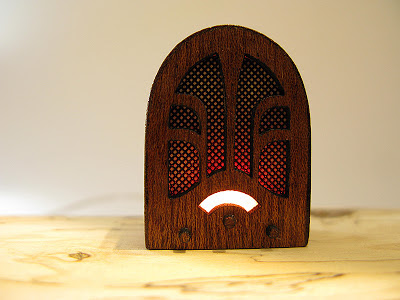 It's still not finished dagnabbit. The lamp in the radio, which is a filament grain of wheat bulb, gives off a lovely realistic glow when connected to a 12v battery. However, when the thing is plugged into a dollhouse circuit (12v still), the light is too bright. I need to dampen the luminance down a bit which can only be achieved by putting resistance onto the wiring or inhibiting the transparency of the bulb. Ho-hum.

Another thing I wanted to try and have deeply admired for a long time is living edge furniture. I found a fabulous seller on Etsy who sells slices of wood (he sells them as bookmarks), that are just the right thickness for mini table tops and work surfaces. I bought some spalted ash which has an amazing grain to it. It almost looks like marble.


Could this be described as modern? Modern rustic? I don't know but I love the look of it.

I also revisited the jigsaw puzzle. A puzzle it was because I hadn't contemplated how it would be packaged. Say for instance I was doing a giveaway (damn, I think a giveaway is well over due on here) Anyway, so could you imagine sending 500 individual pieces in a box and the sort of reception it would get at the other end...'Thanks for nothing, you sadist. I'll spend the rest of my life trying to piece this together *@)£%^'...or words to that effect. Then inspiration struck. When the pieces are cut I carefully put low tack masking tape on the back. This means you get it already made up but could remove the pieces you wanted. 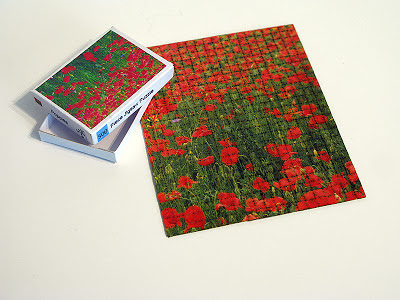 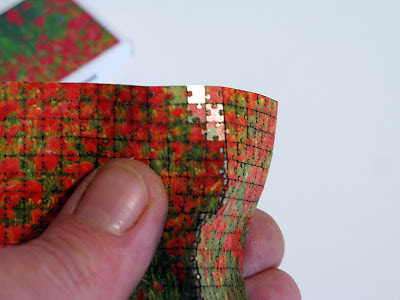 It works really well. The backing makes the jigsaw pliable so that you can get at the pieces with a pair of tweezers. Another thing off my to-do list.

Last but not least I've made a concerted effort to pull together a scene for Minimodernas Anniversary Contest I've made a few things. Some from my to-do/to-try list which, by the way, never seems to get any shorter.
It's amazing, considering the huge amount of miniatures I buy and receive from mini friends, that I didn't have a whole room that went together. I'll show you a few of the things I made but not reveal the whole scene before I send it to Rosa.

It started with making a perspex, pop together chandelier. I loved how the light shines through the facets of the plastic. 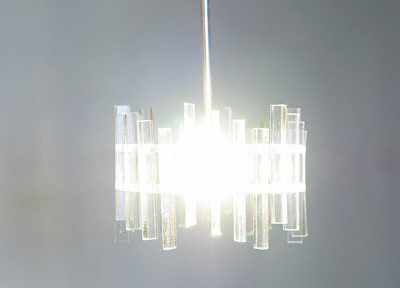 I don't know what led me onto the next thing. My mind often wanders from one random thing to another but I finally got around to making an Ikea 'Poang' chair. Well it's not an exact replica but close enough for me. 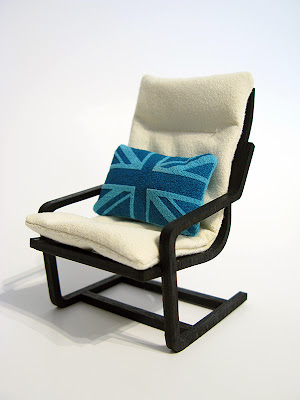 I hope to have the whole thing done and photographed by Monday. Thank goodness for Bank Holiday weekends huh?

Well I had better get on with it.

Have a great weekend all