Bit of this and that

This post is a little bitter~sweet =0/ You remember in my last post I mentioned that I had sorta pushed Modern MC into a swap? All was going well. The parcel left Ole Blighty on a dismal Wednesday morning and had landed in sunny US of A by Friday. Yay for express DHL. Long story short, the parcel and all its contents never made it to Modern MC, or did and was stolen by a decidedly nasty character. I don't seem to have much luck with couriers...Royal Mail are off my Christmas Card list after rattling the life out of a gift sent to Fragments Of Bean. Now this. (If only I could fashion a miniature holdall for a carrier pigeon my problems would be solved ha!)
To make matters worse, a fabulous gift arrived from Modern MC the following Wednesday *lip wibble*
I can't thank her enough for what I think is one of the most thoughtful gifts I've ever received. A 1/6th Miniio house and terrace! 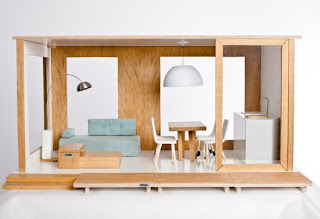 I don't have any modern settings for the miniatures I make so this is like a blank canvass for me. Huge amounts of space and light, the potential for a second story, thus making it into 12th scale and it is the easiest thing I've ever put together. I.LOVE.IT!
So, initial disappointment aside, swap parcel number two is currently underway. I cannot accept that my dear friend will lose out. Nuh-hu *shakes head adamantly*
In between this and trying to get a swap made for Tam Toum, I've been looking at Christmas decorations and wondering how I can incorporate them into something miniature (don't we all?) This has got to be the easy-peasiest three-in-one lamp tutorial EVER. 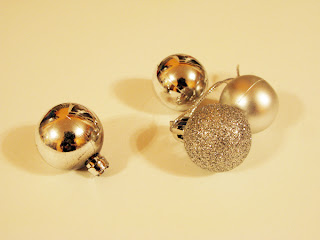 Step 1: Take a bunch of Christmas baubles. Any shape, any size but they MUST be the plastic ones and not glass. 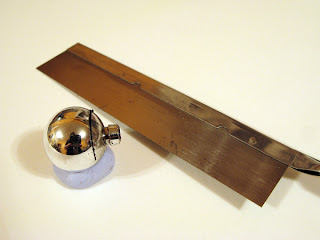 Step 2: Use a blob of blu-tack or similar to hold the bauble whilst cutting the end off (the end that has the wire/string), with a saw.Use some 320 grit sand paper to take off the rough edges.
Step 3: Get a piece of wire (preferably chromed). I used a piece of wire from an egg whisk that I bought for 50pence at the market (and promptly pulled to bits =0) 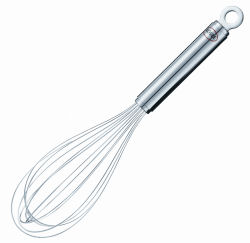 Bend the wire with flat nose pliers into a sorta 45 degree angle. The angle isn't hugely important at this stage. 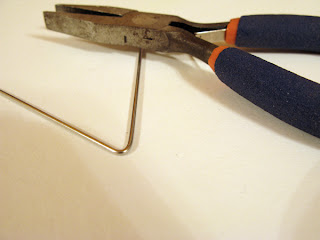 Step 4: Bend the ends upright and then again so you have something similar to the picture below. 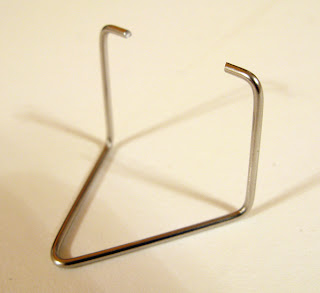 Step 5: For this table lamp, make a small hole in the back of the bauble, (for the light cable), and a few millimeters from either side (for the frame) 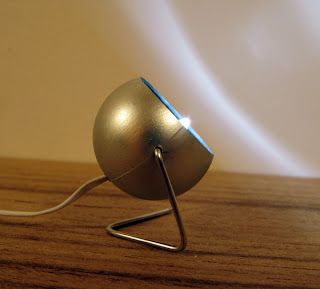 If the frame isn't quite wide enough to take the bauble then open up the angle of the frame to accommodate. Feed the wire through the hole in the back and ta-da...a directional table lamp.
Okay, so I said 'three-in-one' lamp. =0) If you want a pendant lamp, instead of making three holes, just make one hole at the back of the bauble and run the light cable through it 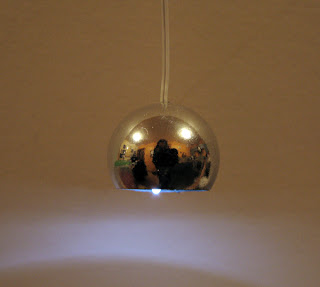 Ta-da again. Number two lamp.
If you want a snazzy floor standing lamp with one of those elegantly curved stands, make only one hole in the back of the bauble. Run the wire through and then feed it down some aluminium tubing (diameter dependent on the size of your wire) It helps to gently straighten the wire out before you try getting it through the tube. Once the wire is all the way through you can bend the tube over something round (a rolling pin or something like that) and it won't kink (because the wire is filling the vacant space inside) 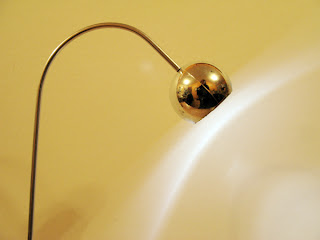 Ta-dee-da-dee-da. Three in one lamp for less than a fiver. And the great thing about the Christmas baubles are they're cheap, come in a nation of colours and have a coating on them so they already look modern.
Before I go and just to give you a giggle, below is a very short stop motion animation I made ages ago in my miniature pub. It was one of those 'I want to see if I can do it' sorta things. Anyway. Given that 'Breaking Dawn' is just about to hit the screens in Ole Blighty AND because I was witness to a hilarious argument between an Edward Cullen (of Twilight fame) fan and a Spikey (of Buffy the vampire slayer fame) fan, I just had to do it.
Sorry the full screen version is a bit grainy. Must work on a high definition version.
Toodle pip for now. Have a great week wherever you are
Pepper =0)
Posted by Pepper